BRUISE VIOLET   Boutique overdrive/distortion.
This is a great sounding overdrive to full distortion unit made for women who take the guitar and rip...
Dedicated from the bottom of my heart to Kate Bjelland of Babes in Toyland Kim & Kelly Deal of the Breeders and our guitar hero/flat mate Stefanie Koscher of Koscher. We wanted to Substitute Stefanie's Overdrive (a Fulltone OCD) with this black eye maker.

Like the OCD the Bruise violet allows two different types of overdriven sounds. By pulling the toggle switch you can chose between brighter high peak and a dimmer low peak. Nevertheless, Bruise Violet changes between two different types of tone clippings all together also. The first clipping is the classic clipping found in the OCD. Two transistors + single Germanium diode. It is definitely one of the most luxurious types of clipping there is. It gives a rich warm overdrive with lots of overtones, true to the character of your guitar and amp.
The other type is a much more dominant and more aggressive diode clipping, created by a crystal pink LED.
This brighter ruder sounding overdrive/distortion will be the weapon of choice for more aggressive types of rock, taking you away from the blues has-been of the 70's to a more modern has-been of the 90's.

Being it a LED type of clipping, one's playing dynamics reflects visually and makes clipping not only a sonic but also a visual experience as the LED shines along bright when notes are being hit.

Controls:
Input jack to the right, Output jack to the left.
First toggle switch: Changes between the two clipping modes.
Second toggle switch: Changes between the higher and lower peak of the classic transistor clipping.
Right knob: Overdrive. Ranging from just a volume boost to a high-gain overdrive.
Left knob: Volume. Intelligently hidden between two knobs to avoid any volume changes while playing live.
Down knob: Tone. Just dial and adjust to taste the range is big.
Bruise violet is a soft overdrive and not a distortion. It tries to be everything one needs before hitting heavier gain pedals, but if you crank the gain full you are up for a meeting with the god of rock himself.
Meant for the kind of women who sucker punch you in the face!
True bypass switching. 9V with standard negative center.  *Pedal shown in video is of an earlier version. 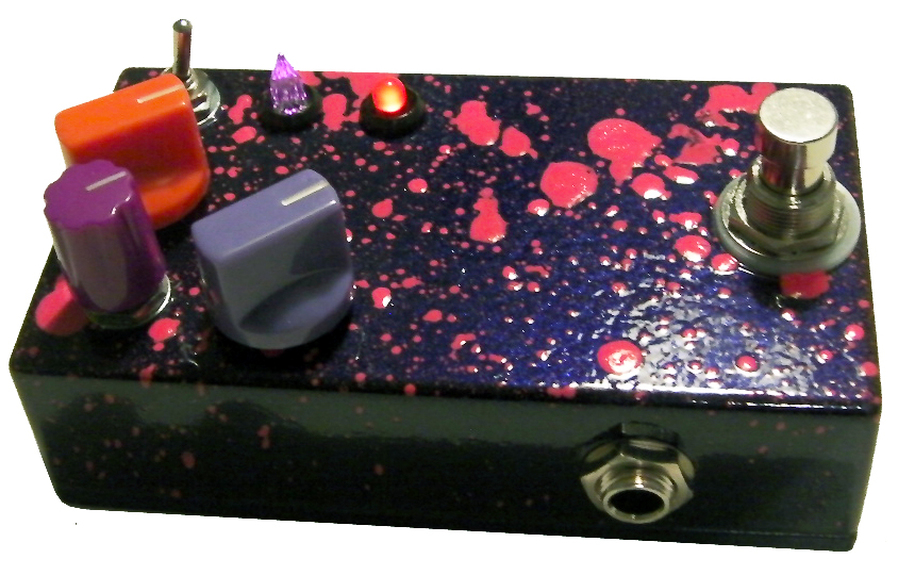