AMPHIBIAN  Analog envelope filter with eight-step sequencer
Amphibian is an awesome device, as the name already implies it is a dual effect unit.
It is actually created due to the longing of a friend for a device that could emulate the sound of a wah-wah pedal. What we have in the end is a great warm diode sounding auto-wah pedal with the possibility to activate an everlasting sequence loop of a fixed tonal scale. This results in an arpeggio of wah-wah bubbles that follow your playing as you go along.

On dry land:
(toggle switch off) a great envelope filter/follower or if you want yes an auto wah.
The Range & Colour knobs both adjust the tone and feel of the envelope filter.
Turn left for more bass and right for more treble.
This makes this unit very simple to adjust. You can find your "sweet spot" by adjusting the two knobs to taste.
Hear how the wah-wah fades away on some settings! A frog lives here.

The Amphibian is a complete analog envelope filter! Taking the sequencer IC aside, the signal path and the envelope effect are both pure analog circuitry, making the unit something completely different then other similar envelope filters out there.
The sound is rich and responsive and the range is big! Therefore It quacks and funks and frogs and phases like no other!

The Range & Colour Knobs help you find the right reaction and alter the response of your picking dynamics. They both adjust a peaking filter which amplifies a specific frequency and cuts off other selected frequencies. Since the electronic circuits in the effect can respond much faster than a human musician can physically move a wah pedal, certain effects that a standard wah cannot achieve are only possible with auto-wah. The response of the effect is highly interactive with the dynamics of your picking and the height of your bridge and pickups - Amphibian makes it possible to vary the response at will via slight adjustments. It may take some practice before the device can be willfully controlled in order to achieve a consistent sound but the Amphibian knows this and is designed to keep it as simple as it gets.

In the water:
By pulling the toggle switch you engage an eight-step sequencer that is triggered by a low frequency oscillator. the Speed knob above the switch adjusts the speed of the sequencer from very slow and lazy all the way to wiggling-blubbering water swells and even beyond.
The nine steps are fixed and are Made by Mystery's own privet creation.
It is our under-water symphony from the depths of a magical pond waiting endlessly to be discovered.
If you turn the speed right from twelve o'clock you will get the most beautiful water-like shimmer effect and your guitar practically turns into liquid. for a full rich sequence turn both Range & Colour knobs to the right. If you prefer to have less then nine steps or like to have a single more solid swell character like the one of a phase shifter, adjust to the left.
Input jack is to the right. Output jack is to the left.
The Amphibian takes 9V with standard negative center and is true bypass. 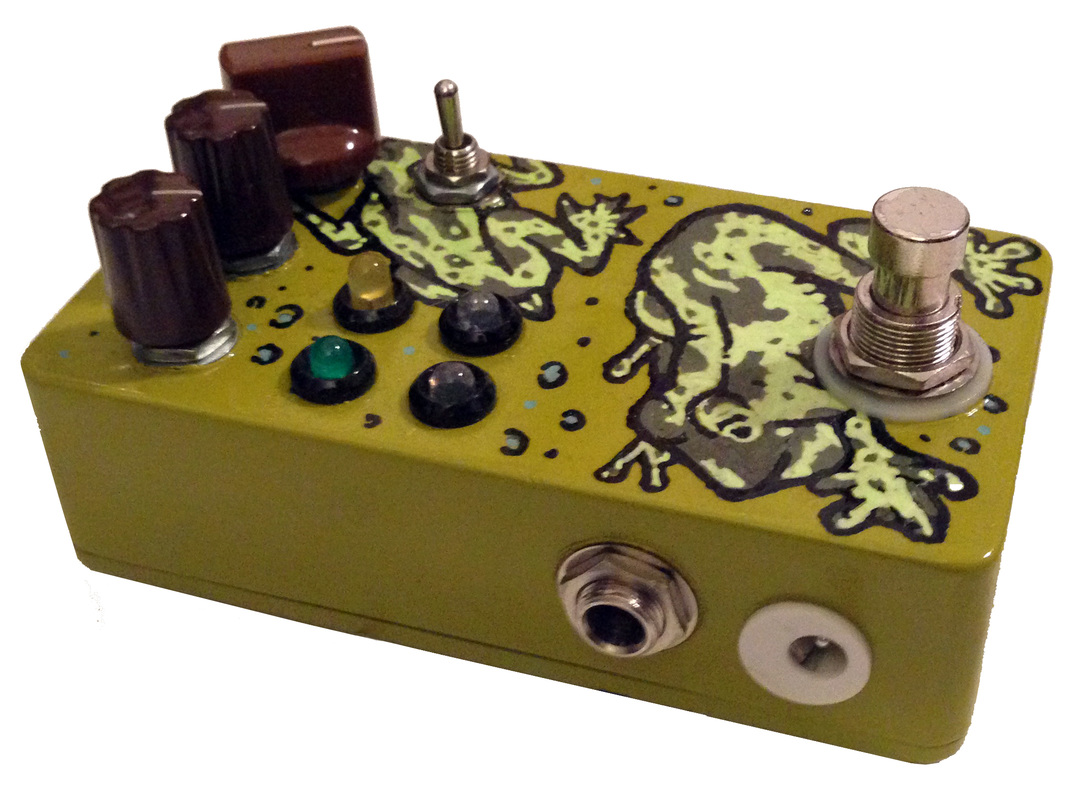